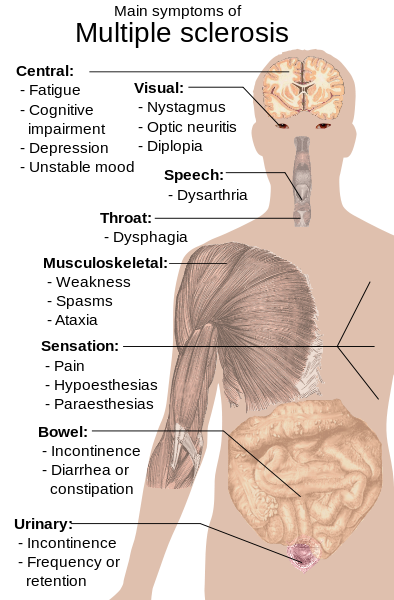 A couple of years ago, before I knew about Vision Therapy and I was very down because of studying with double vision without any solution in sight, I entered a musical instruments store. I wanted to get a book to teach myself how to play the guitar in order to possibly find ways to relieve my eyes and my obsessive brain. At the counter I had a nice chat with the sales person who himself was a musician and I started telling him about my condition. About how I was slowly losing control of my eyes resulting in double vision and how the harder I tried to do well academically the worse it got. He was very interested in how I dealt because it turned out the guy had Multiple Sclerosis. I am not an expert on this condition but it’s an inflammatory disease in which the fatty myelin sheaths around the axons of the brain and spinal cord are damaged. He had suffered various attacks and after every attack it takes a long time to recover, sometimes without full gain of function. A person with MS can suffer almost any neurological symptom, double vision is only one of the possible symptoms that can occur.

It’s a very serious illness. Again, I’m no expert on MS but I think that currently there is no cure and it slowly progresses over the years. I don’t know exactly how long he had been suffering but he told me some days were really bad. Some days he lost the ability to play the piano which is what he loved doing most of all. It was quite an unexpected and magical encounter that day and the true meaning didn’t actually occur to me until recently. I think some strabismics will not completely relate to what I am about to say but the ‘advantage’ of being a severe case is that some symptoms are much clearer. Strabismus is a neuro-muscular dysfunction and, being a neurological symptom, can be part of MS. However, longstanding childhood strabismus starts out at an early age when you don’t learn how to use your eyes correctly. Problems occur immediately but get worse over time. Because the problem occurs at such a young age the experience is quite different from a sudden onset of strabismus later in life as the brain is very adaptable during that developmental stage called the ‘critical period’. In the case of childhood strabismus the brain develops with a built in flaw, which is deplorable knowing that doesn’t have to happen with the right external stimulation such as vision therapy. The neuro-muscular connections that did develop despite misaligned eyes often degenerate over time and when put under too much pressure making your vision worse. Trying to do well academically was increasing my neuro-muscular dysfunction because of the pressure put on my visual system. I could relate to him in the sense that I was slowly losing the ability to do what I love most: to read, to learn and to master new things. Also the central symptoms as stated in the above image are awfully familiar to me. The good news is that, unlike with strabismus that is caused by underlying and progressing MS, you can reverse this neuro-muscular degeneration by relieving yourself of certain pressures and retrain these connections and even gain stereo vision in most cases. I cannot repeat this enough:

That’s why it should not be accepted that any child with this neuro-muscular problem should slip through the net and has to deal with long lasting problems when it is perfectly avoidable. To go back to my story, I never did actually learn how to play the guitar because I was too busy ruining my eyes to obtain that degree after all… That didn’t turn out so well either. I wonder how that man would be doing now…

Related articles:
- The basal ganglia and what they do for you
- Analysis of Strabismus and its effects, patient prognosis and success rate of Vision Therapy
- Reconciling the autonomic and motor nerve systems
- An unsatisfiable urge to become who I was supposed to be