As you might know, at this point my eyes are looking pretty much normal most of the time but the inability to converge consistently remains crippling. It drains and strains a lot. It’s like a massive extra backpack I’m wearing, or an invisible barrier between me and the world, preventing me from getting things done more easily.

Currently, much of the time, I’m living with a male cousin named Thierry (22) and female cousin named Cynthia (26). They are very nice about my peculiar situation and try to understand. I, in turn, am very patient in trying to explain my neurological vision problem even though, after all this time, I’m often fed up trying. By now, however, I am getting quite proficient at linking theory and experience into a coherent narrative. More importantly, they are really interested and concerned on a personal level so it’s worth the effort to make them understand more fully. I’m really lucky in this respect because that quality is not something that can be taken for granted. They even defend me and try to re-explain the issue when other people ask them, “What is your cousin doing with his time all day?”. They try to grasp and explain the reason why I am seemingly unproductive. Because of the nature of this problem, I know it’s nearly impossible for them to understand completely but they are very considerate and do their best. That’s a prerequisite for true communication.

To my delight, Thierry, who is also an engineering student, got so interested that he wanted to perform some of my exercises himself. Earlier we did some trial runs on the Cheiroscope and he was very good at it. His drawings were very stable and deliberate and his corners nice and sharp. That was to be expected. The fact that my drawings aren’t stable and deliberate is basically the only reason I didn’t end up to be an engineer in the first place.

Now, what was even more interesting is our experience with the aperture rule. The aperture rule artificially dissociates accommodation and vergence. In other words, it makes it harder to use both of these basic visual functions appropriately to see a single AND clear image. The goal of this exercise is to further automate and incorporate these skills and enable the patient to use them without effort. This is an often re-occuring theme in Vision Therapy. The Rule has 12 levels for convergence and 12 levels for convergence depending on which Aperture plate you use. I, myself, am not super-solid on any level but my best performance, including head turns while viewing, is at level 4 using the double aperture (divergence setting). Generally I am more at ease with the divergence setting but I can only go up until level 6 before the target picture doubles up. 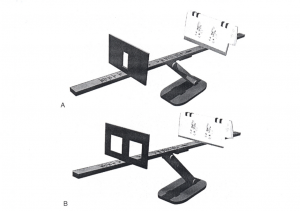 In the convergence setting (single aperture), I have often trouble keeping a clear and single image regardless of the level. Much depends on my fatigue level but generally there is improvement. When well rested, I can go up to level 6 or 7 when keeping my head still and focusing intensely. With head movements things tend to jump around. After all, this exercise is particularly hard because of the artificial dissociation of accommodation and vergence. It is my dream to be able to do the aperture rule fluently and without too much effort up to level 8 or 9. Well, the higher the better but let’s start with that. Good stuff ahead! Can’t wait!

Let’s get to my point. I had both Thierry and Cynthia do the Aperture Rule. I got them to do convergence which they could do well, as I expected. They could go all the way up to level 12, albeit with some effort. At the higher levels they started to need some time to fine tune their vision to adjust to the heavy load of seeing both singly and clearly. They started to have the experience of having to work for your vision! They uttered things such as, “I can see it but I can’t see it well”, or “It takes a lot of effort!”. Thierry even said, “You’ve explained your vision issues so many times but this is the first time I REALLY understand what you were talking about. It must be so exhausting having to work for your vision in this manner ALL the time!” Afterwards he said he was very tired.

For my part, I told them they were fortunate because in modern life convergence is most important when it comes to completing daily living tasks successfully. My inability to converge is the main reason why I’m out of service. Then I had them try divergence. They were completely floored. They even had trouble figuring out how to see level 1 correctly. Maybe it was not an inability to diverge but rather an inability to grasp what was expected of them. It’s not always easy to figure out the Aperture Rule the first time you encounter it. Nonetheless, Thierry was intrigued. He remarked, “Apparently I have a certain visual limitation. I don’t like it. I want to improve, especially as I want to try and become a pilot later on.”

There you have it, people. A Vision Therapy empathy top tip: the Aperture Rule. If you can’t shake your vision problem easily or quickly, make ‘em join you!