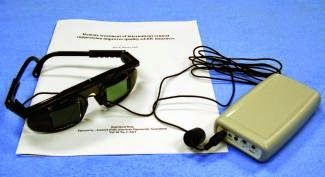 Following an interesting thread on Facebook and some e-mailing back and forth with Patricia Simone Fink OD and Eric Hussey OD who were generous enough to share their time, research and experience with me, I decided to make another investment in my vision in the form of Electronic Rapid Alternation Occlusion Goggles. New year, new projects and new ways of approaching existing problems!

“Electronic rapid alternate occlusion (ERAO) using liquid crystal lenses is used to treat suppression of binocular vision, a defect affecting the sensory combination of two eyes’ images into actual binocularity; that is, simultaneous two-eyed, bi-foveal vision. Suppression remains a primary focus of the investigation of visual sensation in strabismus and amblyopia. However, abnormal binocular sensation in the form of suppression also occurs in the absence of strabismus and amblyopia as intermittent central suppression (ICS). As the name implies, intermittent central suppression is a repetitive on-and-off form of loss of central visual sensation. Active therapies for suppression, and ICS in particular, almost always involve two components: a bilateral (bi-optic) visual environment (e.g., a stereoscope) and visual motion.”

Without stealing too much of Eric Hussey’s spotlight I want to explain some of the ideas behind the treatment.

In his study ‘Remote treatment of intermittent central suppressionimproves quality-of-life measures‘, Dr Hussey extensively tests this type of goggles on young adult students at Job Corps with significant reading difficulties due to diagnosed intermittent central suppression. These are students without strabismus or severe amblyopia but have lapses of interrupted binocular vision disrupting their reading abilities.

Why does this type of intermittant suppression happen? Traditionally suppression was thought of as a cortical inhibitory process all the way back at the visual cortex. Hussey, however, proposes that suppression is not solely contributable to inhibition at the cortical level. He suggests that suppression is the result of lack of development or disruption of the motion (magnocellular) neural pathway. This lack of development in the early stages of the visual process results in a lack of binocular integration further down the line, notably at the visual and extrastriate areas of the cortex.

“As an alternative to the cortical inhibitory explanation, Iʼve suggested that motion is the “on-switch for seeing” and that ICS (Intermittant Central Suppression) is a deficiency in the motion pathwayʼs ability to keep the image alive. Lack of motion signal lets the visual sensation drop out through the same mechanism as Troxlerʼs Perceptual Fading. That would explain why anti-suppression therapies revolve around visual motion in a bilateral field. Since Troxlerʼs probably happens at or near the Lateral Geniculate Nucleus, viewing that visual drop-out in the context of developing visual neurology in an infant might well explain some of the cortical changes in strabismus and amblyopia. Defect at a neurologically lower area will affect development of neurology in higher areas. This differs from the more top-down conventional wisdom summed up in the word Bielschowsky used to explain strabismic suppression: Diplopiaphobia. … Merrill Allen theorized that a 9 Hz alternation rate made use of the Bartley Phenomenon brightness enhancement, in this view representing an improved visual signal at the cortex.” – From the User Document accompanying the goggles

This principle is further elaborated in Eric Hussey’s paper ‘Is Anti-Suppression the quest for visibility’ which will be published in the journal of Optometry & Visual Performance in the near future.

So if, in cases of Intermittant Central Suppression, an underdeveloped primary visual motion pathway rather than inhibition at the level of the visual cortex is the main problem, treatment should be targeted accordingly. Motion should be used stimulating this pathway and consequently encouraging more solid binocular vision.

“This does mean Iʼm suggesting suppression is a primary visual problem that is a result of lack of development of the motion (magnocellular) neural pathway. Developmental, yes, although Iʼve documented whiplash-produced ICS in an adult who did not show a suppression prior to the trauma. I suspect suppression and ICS in particular is not a simple function of stress. Development and/or trauma are involved. Thatʼs why we treat it with therapy and why lenses do not eliminate suppression. Lenses may reduce fatigue, fatigue may make ICS more evident, and therefore lenses may increase reading time before sensory meltdown, but lens application doesnʼt eliminate suppression.” – From the User Document accompanying the goggles

In short when using Rapid Alternate Occlusion while doing a binocular activity these goggles provide a constant motion stimulus, even if put on a frequency at which motion is no longer consciously perceived. Frequent use wakes up this underdeveloped motion pathway, increases binocular viewing time and gradually ‘glues’ the eyes together. To learn about the consequent improvements in reading ability in students undergoing the treatment, which are above those of control groups and not attributable to any other factors, you should take the time to read the ‘Remote treatment of intermittent central suppression improves quality-of-life measures‘ study.

Other ways this device may influence binocular vision (according to me)!

As mentioned above, the goggles stimulate the visual motion perception pathway by the constant motion of the rapid on off alternation and thus a constant change in retinal input. That is the grunt work of anti-suppression, as Eric calls it, and should ultimately ‘glue’ the eyes together.

Rapid Alternate Occlusion might also influence the interplay of retinal and extra-retinal information. During the brief period of occlusion your brain doesn’t have a visual reference of where your eyes are pointing, forcing your visual system to rely on other mechanisms like proprioception to keep its gaze steady and avoid uncontroled retinal slippage. If during occlusion the visual system relies too much on (absent) retinal information to stabilize gaze, and too little on extra-retinal information, one or both of the eyes will start drifting. Uncontroled retinal slippage is what sometimes happens to me while using the goggles because the proprioception and control of the muscles surrounding my eyes (extra-ocular muscles) has been significantly impaired through strabismus surgery.

Therefore, another effect of these goggles then is that they constantly force the visual system to re-evaluate itself and stay busy relying on different neural information to accomplish gaze stability. This too will improve visual stamina! As it forces the visual motion pathway to stay active and develop itself more fully, it also forces these two types of neural input to integrate more fully to deal with the visual challenge imposed by the goggles.

How I currently use it

I have a visual history of alternating strabismus with pretty good eye sight in both eyes. I have experienced constant double vision for a couple of years. Nowadays my eye alignment has improved to the point that I have aligned eyes most of the time. Traditionally I used to be a esotrope but after surgery my strabismus became non-committant with a tendency towards exotropia. Right now I still have Convergence Insufficiency and intermittant suppression in certain fields of vision resulting in a lack of real binocular fusion.

I’m pretty confident as far as further ocular motility improvements go. I can eliminate the Convergence Insufficiency by continuing my visually conscious lifestyle. It’s also important to realize that these are not separate issues. If Convergence Insufficiency disrupts eye alignment for near tasks, there is no fusion. If there is no binocular fusion, eyes have a tendency to wander.

With these goggles I hope to continue and accelerate the ‘grunt work’ of anti-suppression. It will do so by means of a combination of the retinal and extra-retinal information mechanisms described above.

I use it every day while doing not so spectacular tasks like watching TV, daily domestic activities (if it doesn’t get in the way) or maybe some brief reading. I have yet to use it with a Cheiroscope as demonstrated in the video next time I go for VT. It does feel intense and the increased visual load tires you. Unsurprisingly it also tires people without a history of binocular problems. Go figure.

I have been instructed to use it 40 to 50 minutes a day, 5 to 7 days a week. If that is too taxing, I should work up to it. That is what I am doing. I think I’m more or less at 20 minutes a day. I use it in periods of 5 to 10 minutes a time at a setting of 5Hz with equal ‘open time’ for both eyes as I am not severely amblyopic. As Eric puts it: “The hope would be that we literally improve/wake up the central visual sensation or central visual signal which means your brain should have the information necessary to glue your eyes together. With diligent use, I’d like to think that the end of the year might bring some improvement. Neurology is tough stuff, though.”

Nevertheless, the theory makes sense and it feels visually intensive in various ways so I’m very curious about what the results of my experiment will be!