In my previous post, I pointed out some of the major life problems (mobility, sociability and reading) difficult and laboured eye movement control is causing. I decided to take a step back and re-evaluate. I also relistened to Fixing My Gaze to gain perspective. I came to the conclusion that, even though I have already improved massively, I am still experiencing all the problems Susan Barry and some other people in the book were experiencing prior to Vision Therapy. She described a life that was hampered by these visual problems although somehow she was coping. She also mentioned that many of these visual symptoms deteriorated towards her late 30’s. By then her life might have become a little more routine as her career path was established and she might have compensated for these fledgling visual skills drawing on experience she acquired when she was younger. I’m just thinking out loud here. Either way, these are some of the problems she described that still resonated with me very strongly.

- Not being able to sustain close viewing for long periods resulting, for instance, in limited reading and computer time.

- Not being able to look in the distance for long periods of time resulting, for instance, in driving times limited to one hour.

Usually people are either ‘farlookers’ or ‘nearlookers’ but eye muscle surgery made it so that it’s hard for me to move my left eye to either side of its socket.

- ‘After 20 minutes of tennis the world would move up and down.’ I personally don’t play tennis but this can be any sports or quick motion.

- My gaze has not been completely stabilized (latent nystagmus). The world appears jittery. Each morning I open my eyes to a drifting world.

- Experiencing differences between static and dynamic acuity and vision. In many strabismics, static acuity is okay while acuity drastically diminishes while walking or in motion.

- Not really tunnel vision but reduced field of view. Not taking it all in.

- Saucer-eyed look. Aesthetics are not that important to me although the fact that I keep my eyes open very widely reflects the effort I put in viewing, capturing the situation and keeping it all together visually.

Before my strabismus surgeries (ages 16, 18 and 19)  most of these problems were manageable to a certain degree. After the second strabismus surgery, things instantly became much more dramatic and a normal functional life seemed like a fantasy. I didn’t feel like a developmentally adapted strabismic but rather like someone who had been in a severe accident, was shell-shocked and consequently burned out trying to cope like nothing happened.

The fact that I now once again start to identify with what Susan Barry described as what I shall call her “pre-VT state in her late 30s and 40s”, which definitely still has its problems, is good news. Notice how problems such as constant double vision are not in the list. This might mean that I’m a little more than a year away from my first stereo vision experience. Let’s not jinx it. If, during that year, I can considerably reduce the amount of effort I put into operating my visual system and ameliorate its accuracy and efficacy to a satisfactory level, I will be glad too. The point being that it’s not the time to be disheartened but it’s time to double down and continue. It’s not like there’s any other option.

- I have made some new VT appointments. It’s been seven or eight months so it might be good to get myself assessed and get some coaching. A particular question I want to ask is, “Forget the last four years and imagine you saw me now for the first time, what would be your prognosis or your gut reaction as an experienced VT?”

- When I asked her whether there was anything else she could think of that could help me, my guiding optometrist advised me to go see an osteopath. The idea being that there might be ‘a structural problem holding me back from making easier and faster progress’. Being desperate, I’m not saying no. I’ll give it a shot. I think my structural problem are damaged eye muscles and it simply takes time to heal but I’m not arguing. If neural transmission improves in some way, I’ll be grateful. If  not, at least I tried.

- Sometimes I notice that my glasses may start to cause me more harm than good. My glasses’ prescription are +2.5 for either eye with a pinch of astigmatism in the left eye. On the one hand, they take the edge of accommodation at close distances. However, the plus lenses are promoting my eyes to diverge. This means that I have to work against that while converging on near objects or print. I’m noticing this is considerably easier without glasses. The lack of glasses, however, might cause accommodation to get tired much faster. It’s about weighing the pros and cons and having them meet halfway. This is one of the reasons, I’m going to give contacts a try in the foreseeable future.

Furthermore I started thinking about specific activities I could do to improve sociability, mobility and reading while practicing the visual and vestibular integration that is required for these activities without overloading myself.

- A specific ritual I’ve taken up is to go out every day, even if there is no particular goal or reason. Run errands. If there are no errands to run, go drink a cup of coffee in a cafe.

-  My favourite activity while being at a cafe is reading. The problem is that I can’t really read unaided or at least not for a reasonable amount of time. Nevertheless the current level of my visual skills in combination with the audio version of a book allow me to read in public. Admittedly, it’s not a very cheap way of doing things but as a test case I got the audible and paperback version of the same book. 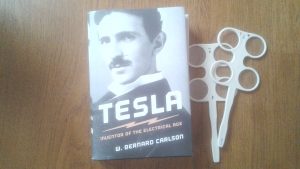 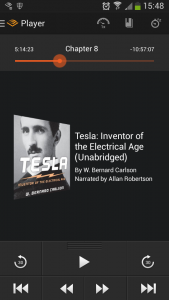 I put the headphones and visually read along with what I hear. If I lose my place visually it’s not the end of the world and I don’t get stuck, I just move along on audio and find my line. This has multiple advantages:

1. I don’t HAVE to perform perfectly visually to stay in the game so there’s less stress and strain. Because of this, and the fact I can gather much of the meaning through audio, actually results in better eye teaming, alignment and saccades. I don’t have to do it all visually. I also read much faster this way.

2. This way of reading gives me an idea of how wonderful it must be to read without reading issues. Being able to read without pain and constraints is just happiness. It’s not as good as the real thing but definitely a moral and confidence booster even if I know it’s partly an illusion*.

*This reminds me of a study I once heard about. In non-English speaking areas, people often watch films using subtitles. When people are asked whether or not they actually read the subtitles, they often say no. They are under the impression they gather the meaning of what is said from the spoken English words. However, once these subs are removed, people realize how much they overestimated their English language comprehension skills and how much they were relying on those subtitles to understand what is said. They are not aware which sense is delivering the meaning to their brain. Is it the English audio? Or the visual subtitles?

For my sensory profile, however, audio books are the ‘subtitles’ to my visual reading. For me it is the other way around and, as a matter of fact, I do tend to forget how much of my reading is done through audio when also looking at the text. I really start having the impression and illusion that I am doing most of my reading visually. It’s only when the audio is taken away again, I notice once again how difficult and laboured my visual process actually is without audio back up.

3. I always wanted to be able to read and work in public places and now I can. The headphones have the added advantage of partly blocking out environmental noise. Being able to work around other people and sounds is a vital skill in order to function in the average work place.

- When not being able to function and be a full member of the work force and, consequently, society, it is sometimes hard to see the point of meeting up with friends or other people. You are just spending money you don’t have, talking about things you can’t participate in while getting more nervous about having to fix my vision. Now I’m trying to – well – give less of a damn. If you stop meeting people, isolation will be complete and things will be even worse. I try to be social and enjoy it without overdoing it.

In a nut shell, I’m trying not to be hard on myself and do what might seem like trivial things to work on (visual) skills I will need later on to live and work. It’s important to do them rather than do nothing in despair. The combination of walking or taking other means of transport, going somewhere public, look around, read and study a little, interact with some people and go back might drain energy and cause some brain fog at the end of the day but it also is the closest thing I can handle right now that resembles a working day. You won’t be helping your vestibulo-ocular connections by not moving. What use are clear thoughts, if you are confined to one location to maintain them and they unravel when in motion? What use is a brain if you can’t carry it around?